Affected by the COVID-19 epidemic, the unemployment rate in the United States reached its peak last year, and the labor market has gradually recovered after over one year from now, the unemployment rate is expected to drop to pre-pandemic level by the end of this year. However, according to the latest data released by the U.S. Department of Labor, the current U.S. labor market is still weak, more than 8.2 million people quit the labor force as compared to last February, that is to say, there is a big crowd who is ready and looking forward to crank back up to the labor force market. 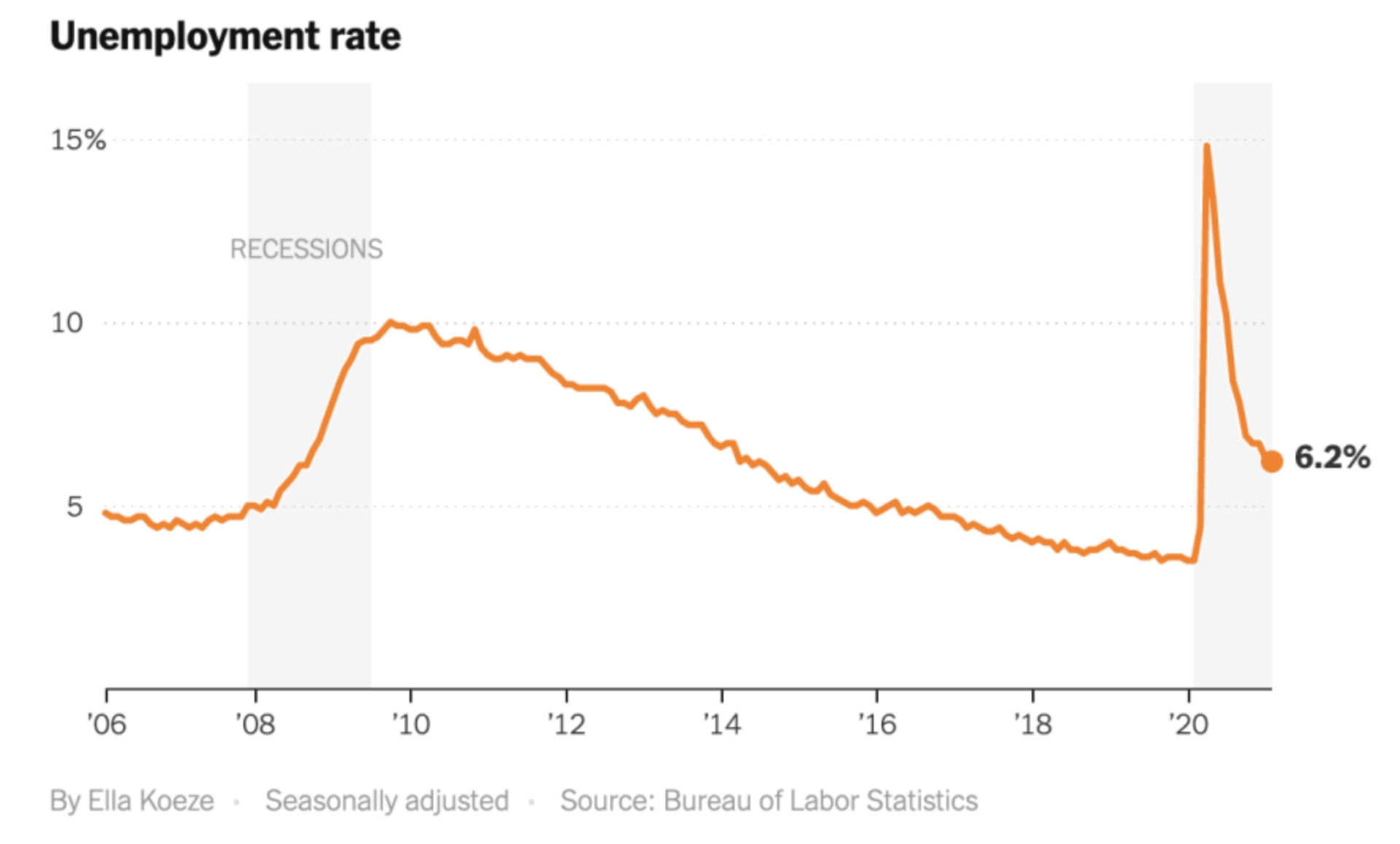 According to Goldman Sachs Group,the unemployment rate is expected to drop to 4.1% or even lower by the end of 2021, close to the pre-pandemic level, and the labor market will recover in the near future. In addition, Goldman Sachs expects that US wages will return to pre-pandemic levels by the end of 2022. The Secretary of the Treasury Yellen also supported this view in an interview with foreign media.

"We expect there will be an employment boom this year, mainly because the economic reopening, fiscal stimulus and previously rising household savings will drive the growth of demand."

Another report pointed out that the United States plans to complete the vaccination of 80% of the population in June this year and reach 90% by August to achieve herd immunity. According to a report of the Global Times, Wu Zunyou, chief epidemiologist at the Chinese Center for Disease Control and Prevention, revealed that China and the United States will lift each other's travel restrictions as soon as August or September, becoming the first country in the world to take this measure.

From the data and reports above, it is not difficult to see that the economy has gradually recovered, and the US government has effectively controlled the pandemic, which means that the labor market is about to usher in a new wave of employment. However, the jobs report recently released was disappointing even with the rising vaccinations and falling coronavirus cases, and the government's trillions of dollars of stimulus into the economy.

According to Xinhua News Agency, data released by the US Department of Labor on May 7, 2021 showed that it created just 266,000 new jobs in April on a seasonally adjusted basis. The increase in new jobs fell well short of Wall Street’s forecast. Economists surveyed by Dow Jones and The Wall Street Journal had estimated 1 million new jobs. The official unemployment rate, meanwhile, rose to 6.1% from 6%, the unemployed rose by 100,000 to 9.8 million from the previous month.

You can imagine how difficult if you want to go to the United States to find a job now, and if you choose to wait for the job openings surging, think about the at least 8.2 million potential competitors. So please be sure to make plans before you are going to move to the United States!

And if you ask me whether there is an easy way to immigrate to the United States. Of course there is! Here Globevisa can provide customers with a super simple way to go to the US with fast timeframe, low risk and low net cost, and you do not have to worry about finding a job:

EB-3 immigrant visas allow certain workers(professional, skilled and unskilled workers) to obtain a U.S. green card or permanent resident status. The “EB” in the EB-3 visa stands for “employment based”, every fiscal year, approximately 140,000 employment-based immigrant visas are made available to qualified applicants under the provisions of U.S. immigration law.

Compared with other immigration visas, EB-3 has the following advantages:

1. Get a green card in one step. It takes only Ten monthsfrom preparing to apply to entering the United States to get a green card.

2. No need to bind the employer to maintain the identity. The main applicant only needs to work for the sponsoring employer for one year to freely choose a job, and the accompanying spouse can freely choose a job as long as the green card is obtained.

3. Enjoy all the comprehensive US social welfare, children under the age of 21 can enjoy pure American education.

Therefore, EB-3 will be the most suitable way for you and your family to immigrate to the US if you want to obtain your green card with less cost and quicker timeframe. If you are interested, please do not hesitate to contact us, only 4 SEATS LEFT for NOW!! 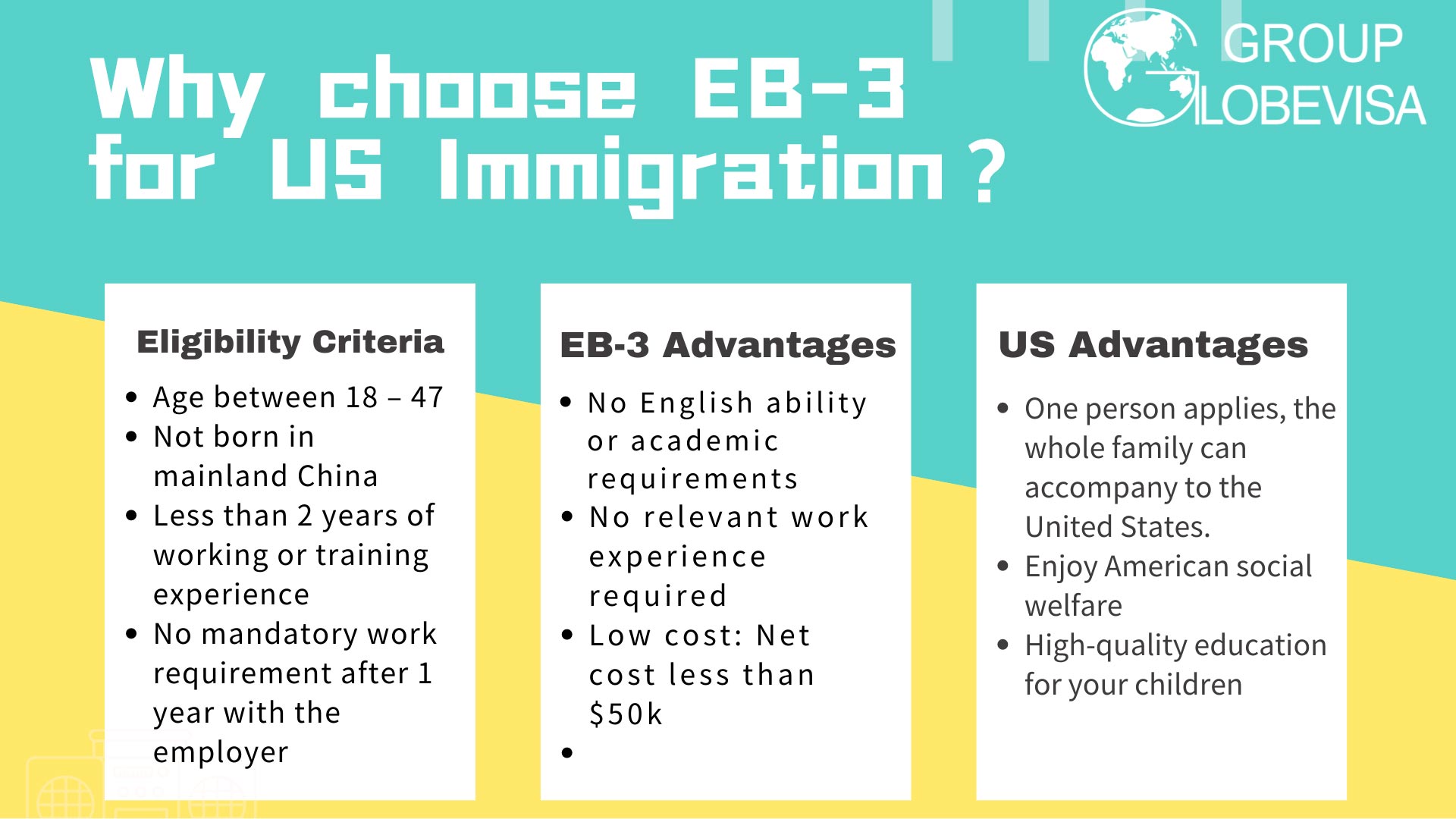 Latest News/Updates
Montenegro The first candidate for the EU eighth enlargement...
How can we help you to get a US green card in 10 MONTHS through EB-3 route?...
US EB3 - Is it difficult to find a job in the U.S. now?...
Need to know about U.S. EB-3 Employment-based Immigration...
Globevisa group wishes you and your Happy Spring Festival!...