Portuguese passport holders may be allowed for U.S. E-2 visa application in the near future, reported by IMIDAILY, an immigration news platform. The news is believed to be able to urge more potential immigrants to apply for Portugal Golden Visa, which leads to Portuguese permanent residency and Portuguese citizenship after being held for 5 years. 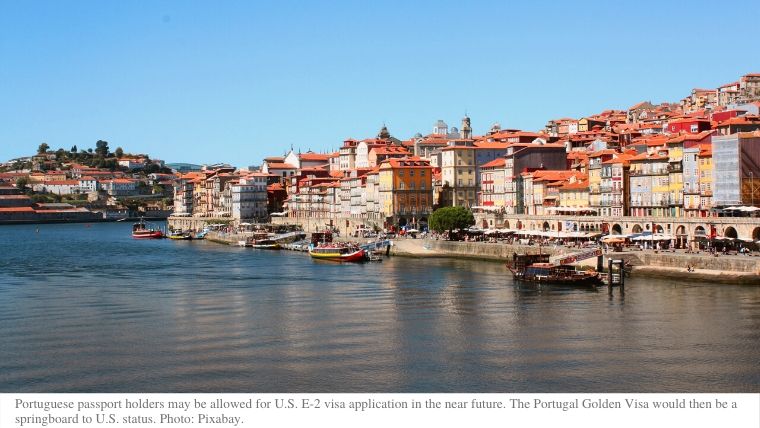 The U.S. House of Representatives passed the bill that allows Portugal to be one of the contracting countries of U.S. E-2 treaty last week. That is to say, if the bill is also passed by the Senate and signed by the President, Portuguese citizens will be eligible to apply for E-2 visa. The E-2 visa, only open to passport holders of treaty countries, grants similar benefits as U.S. Green Card does.

It is convinced that the already renowned Portugal Golden Visa would become more alluring due to the good news. The program used to be popular for its friendly investment requirement and residency requirement. It is a highly cost-efficient way of acquiring the resident status of one of the major European countries, directed to permanent residency and citizenship. If the bill does be put into practice, the golden visa will also be a springboard to U.S. status, strengthening the competitiveness of the program.

In order to obtain Portuguese Golden Visa, mostly, potential immigrants choose to make an investment of EUR 350,000-EUR 500,000 in real estate or government authorized fund products. However, there is actually an even more low-risk way for high-net-worth individuals. In accordance with the Portuguese immigration law, people can also apply for golden visa via making a deposit of EUR 1 million.

The EUR 1 million capital transfer option of Portugal Golden Visa enables applicants to acquire the Portuguese status in an easier way. Applicants only need to conduct capital transfer with a value equal to or above EUR 1 million, and then they can obtain the Golden Visa, with which they can enjoy multiple benefits in Portugal and visa-free mobility in Schengen area. During this period, holders of Portuguese golden visa are only required to spend 7 days a year in the country for 5 consecutive years.

After 5 years, application for Portuguese permanent residency and Portuguese citizenship will be allowed. By that time, hopefully, Portuguese passport holders would have added likelihood to immigrate and work in the U.S.

Latest News/Updates
Globevisa is recruiting business partners...
The reopening of the Application Window of QIIP was delayed until April 2021...
Congratulations on the Grand New Opening of Globevisa HK office!...
Globevisa credited as Best Perfomer for Montenegro CIP...
Globevisa showing support to Montenegro by donating medical supplies to embassy...