Major banks in Singapore have reported a growing number of inquiries about bank account opening from Hong Kong due to recent upheavals in the city and the enduring Sino-U.S. trade war.

A trade war has long been a demonstration of confrontation between powers in modern society. In the current conflict, Hong Kong, as the re-export hub between China and the U.S., inevitably becomes the place where the two nations wrestle with each other.

Meanwhile, the controversial bill and public outcry over it create chances and new excuse for the U.S. to take methods to further urge China amid the trade war. This June, a bill to amend the United States-Hong Kong Policy Act was introduced by U.S. Senators.

The policy, first signed into U.S. law in 1992, allows U.S. to treat Hong Kong separately from China on issues concerning trade after the handover in 1997. Therefore, amendments to the policy are possible to bring serious impact on Hong Kong’s economy. Ines Lam, an economist of CLSA, is convinced that if the policy is removed, foreign investment in the city may be gradually withdrawn. 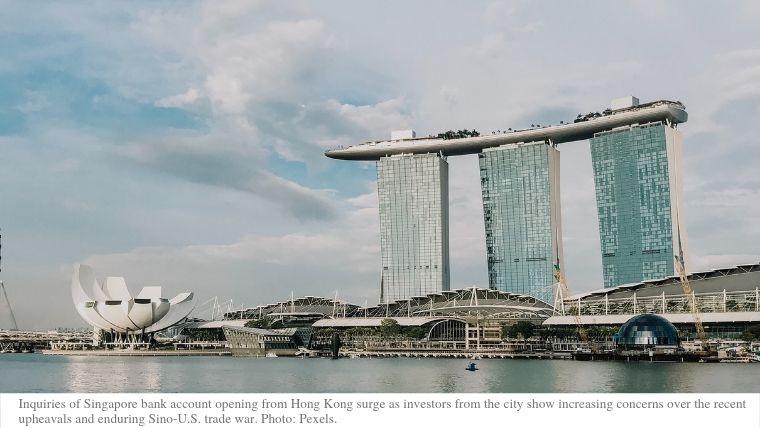 As the second round of trade talk begins, further actions are possible to be carried out by the U.S. in order to fan the flames of the conflict. At the luncheon meeting on July 31st, 2019, Hong Kong’s first chief executive Tung Chee-hwa also stated that the U.S. is one of the masterminds behind.

What is going on in Hong Kong alarms all investors in the city. After all, investors are always looking for a business environment which is stable, free and somehow predictable. Some are also plagued by the view and stance that the Hong Kong and Macao Affairs Office gave at the press conference held on July 29th, 2019. Based on the answers provided by the office spokesman Yang Guang, there won’t be any interference in stabilizing the city.

Many investors have mentioned their concerns over the worsening situation.

Opening an offshore bank account as a backup plan

According to reliable sources, in the past few weeks, many in Hong Kong have already been inquiring about bank account opening to major Singaporean banks.

Though Singapore is not the only world-renowned financial hub in Asia, it attracts a raft of investors around the globe with social stability that it prides itself on. On the basis of 2018 Global Law and Order Report released by Gallup, a global analyst company, Singapore is one of the safest countries in the world in tandem with Norway.

Such a feature is regarded as Singapore’s key to success by Chan Chun Sing, the city state’s Trade and Industry Minister. It is also the foundation of the country’s thriving economy and of course, the stable and well-developed banking system.

All banks in the country shall operate in accordance with the Banking Act issued by Monetary Authority of Singapore (MAS), in which clear legal distinctions between different types of banks, including offshore banks, are stated. Thus, offshore banking is highly protected by a sound set of rules.

While possessing such a comprehensive banking system, Singapore offers simple bank account opening procedures for foreign investors, especially when compared with Hong Kong. The 2018 Bank Account Opening Survey, conducted by The Hong Kong Institute of Chartered Secretaries (HKICS), shows that opening a bank account in Singapore is far easier than it is in Hong Kong concerning the amount of information and documentation required. It also takes shorter time to process.

As it happens, the lenient KYC review and short processing time make Singapore an ideal place for investors, especially those from Hong Kong who are now trying to come up with a backup plan under current situation, to open an offshore bank account.