Favorable migration policies are expected to be introduced in Canada as promised by the Liberal Party’s leader Justin Trudeau, who won his 2nd term in Canada’s general election on October 21st, 2019. New migration policies will mainly cover matters related to economic migrants, people who immigrate to Canada for the improvement of life either through investment, business or skilled migration programs. 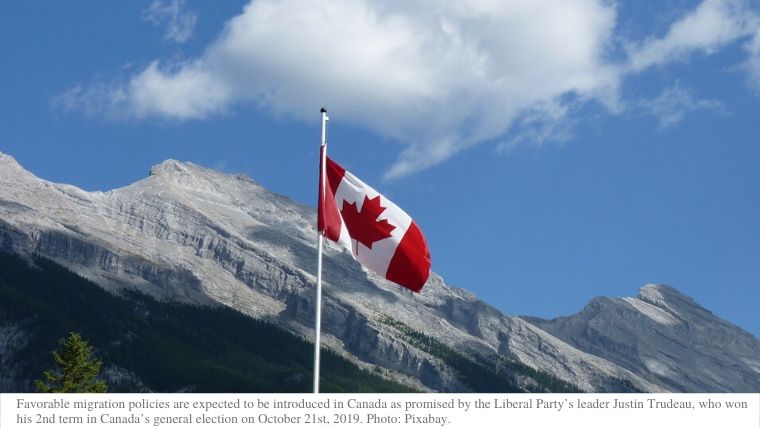 The significance of immigration has been mentioned by the Liberals for many times both before and during the campaign. Pledged by Trudeau, the team would strive to welcome more economic migrants to Canada and expand immigration to more rural regions across the country. Therefore, the election result is undoubtedly a positive signal for all those who want to immigrate to Canada.

When it came to more details, primarily, the liberal’s leader said they would increase the number of new immigrants to between 350,000 and 400,000 by 2021. The increase would cover all immigration areas, namely economic migration, family reunification and humanitarian programs.

In addition, Trudeau promised to propose a new Municipal Nominee Program, which would allow up to 5,000 spaces for permanent residents a year. Regions that previously did not benefit from immigration would have the opportunity to nominee new immigrants and let them fill local skill shortage.

Also, the Liberal Party pledged to make Atlantic Immigration Pilot (AIP) program permanent, with 5,000 new quotas allocated each year. Launched as a pilot program, this skilled migration route was meant to open for only 3 years. Now, more potential skilled migrants may benefit from this program.

Though the Prime Minister has only started his second term for a few days, many feel optimistic that the above promises will succeed and be put into specific migration policies. After all, economic immigration has long been playing an important role on Trudeau’s platform. As it is seen, a plan for bringing in one million immigrants in three years has been carried out by Trudeau’ team since 2017, and it will still be in effect under the Liberal governing.