Check out the most popular way toward UK residency!

According to the summary of latest statistics released by GOV.UK, a total of 3.2 million visas were issued in the UK in 2019, a 10% increase compared with the previous year, continuing the upward trend of the past decade. Of these, more than three-quarters (76%) were to visit, 9% were to study (excluding short-term study), 6% were to work, and 2% were for family reasons. 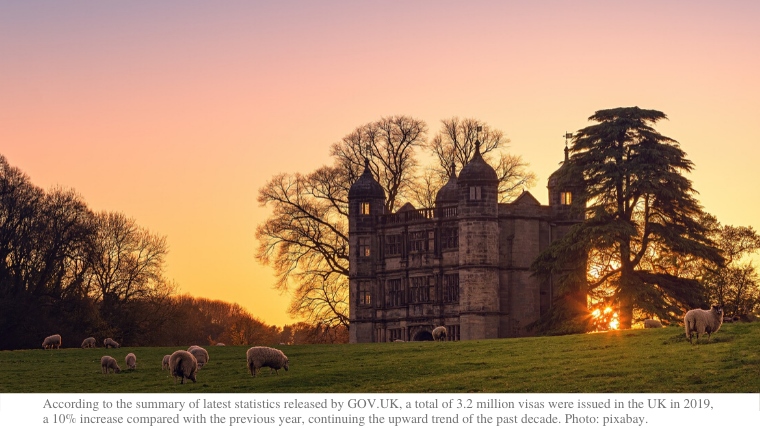 Before the introduction of the ‘points-based system’ (PBS), the UK granted 193,517 work-related visas (including dependants) in 2019, 10% higher than 2018, and the highest level since 2007. Most of the increase was attributable to the increase in the issuance of Skilled (Tier 2) work visas, which increased by 11% to 113,958, the highest number on record.

In 2019, 285,508 Sponsored study (Tier 4) visas were issued (including dependants), a 19% increase on 2018, and the highest level since the year ending June 2011. Among them, Chinese nationals were the most common nationality, accounting for 42% of the total. The number of Tier 4 visas issued to Indian nationals has also increased significantly, almost doubling compared to 2018 (up 93% to 37,540).

The requirements for the Representative of an Overseas Business visa are simple: dispatch with no investment requirement and low interview rate. It takes very low costs and its processing is fast (in Globevisa's fastest successful case, the client was submitted the application and approved on the same day). The official success rate is as high as 90% while Globevisa's success rate so far is 100%.

Investor visa (Tier 1) is a conservative option: safe government bond investment with 3 streams. Its requirements are also simple, source of funding can be done at ease. Meanwhile, education level, language ability, management and investment experience are not compulsively required. More importantly, there is no quota limit. According to the official report of immigration statistics in 2019, the UK has issued a total of 925 Investor visa, with a success rate of 96%.

The Innovator visa is a new project launched in March 2019, which is regarded as an upgrade of the Entrepreneur visa. The Innovator visa is aimed at more experienced business people who have funds to invest in their business. It is endorsed bodies and business experts – rather than the Home Office – assessing applicants’ business ideas, in order to make sure that the routes are focused on only the most innovative, viable and scalable businesses. As of December 2019, a total of 88 Innovator visas have been issued, with a success rate of 97%.

Although its success rate is pretty good at present, as the rule of thumb in this industry, a new program comes out with relatively low and vague requirements in the beginning in order to see how the market react with the new policy, then subsequent modification can be made with more flexibility. Therefore, as the current standard of the Innovator visa is not supported by a large number of applicants, it is foreseeable that more specific requirements will be designated with more details in the future. With regards to the development trajectory of similar visas in other countries (such as the Singaporean Employment Pass), it is not difficult to predict that its threshold will get higher and higher.

Globevisa, as one of the earliest companies that started services on programs of the UK, has accumulated rich experience and a large number of successful cases. Globevisa has strong legal support and cooperates closely with many professional legal firms to guarantee the high quality of application documents. We not only provide the application for these visas, but also the complete follow-up service, including landing reception, registration company, bank account opening, landing service and renewal service. In addition, Globevisa also has an office in the UK, and is always dedicated to providing each client with the most reasonable solution to achieve their purpose.

Latest News/Updates
Globevisa is recruiting business partners...
The reopening of the Application Window of QIIP was delayed until April 2021...
Congratulations on the Grand New Opening of Globevisa HK office!...
Globevisa credited as Best Perfomer for Montenegro CIP...
Globevisa showing support to Montenegro by donating medical supplies to embassy...